On May 5, 2021, provincial and territorial emergency officials across Canada tested the Alert Ready system. Hear what Canadians had to say.

On May 5, 2021, provincial and territorial emergency officials across Canada, with the exception of Nunavut, Alberta, Ontario, Quebec, Nova Scotia, and the Northwest Territories, conducted tests of the Alert Ready system. These alerts were sent via radio, television, LTE-compatible wireless devices, and other third-party emergency alert distribution channels such as Alertable. 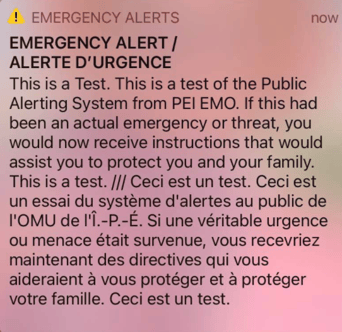 The one-way broadcast nature of most Alert Ready distribution channels such as radio, television, and LTE compatible wireless devices do not provide a direct way for the public to provide feedback on alerts received, including test alerts. Therefore, Public Emergency Alerting Services Inc (PEASI) again took the initiative to solicit feedback from the May 5, 2021 test, with a specific interest in the effectiveness of the wireless alerting channel.

PEASI created an online survey and asked the Canadian public to complete it. The survey was widely shared via municipal officials, social media, news organizations, and on the Alert Ready website before and during the tests.  In total there were 4,946 responses which is a decrease of 57% from the last survey conducted in November of 2020.  This can be attributed to the decreased number of provinces choosing to participate in the test alert largely because of COVID-19 priorities.

While Nunavut, Alberta, Ontario, Quebec, Nova Scotia and the Northwest Territories did not participate in the test, survey responses were received from the public in some of these areas and this data was included in the report created.

Success of the test alert: 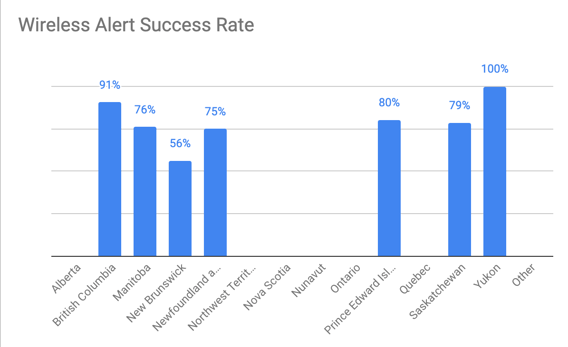 One of the survey questions asked:

“if you could improve one thing about emergency alerts, what would it be?” And the top 5 responses included:

Next to wireless alerts, the most popular distribution methods were third-party mobile apps and television.  Radio and social media were also ways that the alert was received.  15.8% reported that this was their first alert and 7.3% reported receiving a real alert in the past as well as having received the most recent test alert.

For those with issues receiving the alert:

For those who have devices not compatible with the Alert Ready system, Alertable is a great option to ensure that you still receive emergency alerts.  Alertable is able to send notifications more than 15 different ways allowing increased recipient choice and increased compatibility with systems like Alert Ready.

What are other tips we could talk about? Leave a comment below and let us know.

Read more on our Disaster Series:

To sign up for Alertable, or to learn more, visit https://alertable.ca

On November 25, 2020, provincial and territorial emergency officials across Canada tested the Alert Ready system. See what Canadians had to say.

On May 4, 2022, emergency officials tested the Alert Ready system. See what Canadians had to say.

Keep up to date on new insights, thoughts and opinions for emergency alerting and mass communications.